Huge apologies to all for being gone longer than expected. Apart from revisions, the month started out with two weeks straight of having a kid home sick (you know how bugs do their rounds). Resistance is futile when you're stressed out. Tragedies in the news really get me down. From the Boston Marathon to more recent tornado devastation...it's too much. My heart goes out to all the victims and their families.

Also, we got two female guinea pigs in April and I'm now positive they came to us pregnant (totally unexpected and due any day). I've been off the net due to daily overload, but I'm all caught up now and to celebrate Memorial Day weekend, last night I took my kids to see Star Trek: Into Darkness.

Tremendous movie. Extremely well done in so many ways. I think it's perfect for Memorial Day and if you sit through the credits, you'll read an appropriate dedication.

You'll love the movie whether you're a Trek fan or Trek virgin, but if you've seen the original movies, especially The Wrath of Khan and Star Trek 2009, you'll have a deeper appreciation for the significance of certain lines and scenes. I have two boys who are Trek addicts. After seeing this movie, my oldest son is now a Trek convert...and he's a super tough critic.

And to all you lovers of romance, it may not be the focus, but all the Trek series explore relationships of all kinds, including romantic ones. After all, Star Trek the original series is famous for television's first interracial kiss. It was the romance between Riker and Troi in Star Trek The Next Generation that initially drew me in, but after an all night original Trek movie marathon (rented them all and watched them back-to-back), I was hooked for life. An official Trekkie.

I'm sentimental about all the romances in Star Trek, but what really makes the series so incredible is its depth of characters and stories that boldly explore moral, ethical, relationships and political issues. For the writer, there's an incredible amount to be learned from Star Trek (as a whole) about story telling. I think that could be analyzed to no end.

Confession #2: How Trekkie am I? 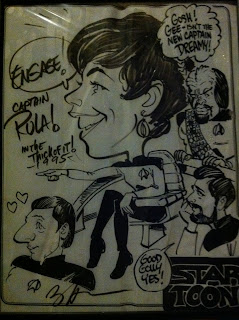 1. Okay, so I haven't actually dressed in costume for a convention (though I was a Deanna Troi wannabe), BUT I did make a Halloween Trek costume for my middle kid when he was in fourth grade.

2. I've been to two conventions, which by some fan standards is pathetic, but hey. I did get a  comic drawing of me as captain done at one of the conventions (see photo above). I had very short hair back then (college days). You can also see the wrinkled water damage since this, and some other collectibles, were in our basement when it flooded a few months ago.

PLUS, since all self-respecting writers need their reference books, I have....(drum roll)...

I kid you not. They actually 'made' an entire language, grammar, vocab and all. No. I'm not fluent in Klingon, but it's cool to have ;). Sigh. Worf and Dax...another awesome romance.

I love all the movies, but I have to say that Star Trek: Into Darkness is epic.

So...are you a Trekkie? To what degree? Which Star Trek romantic couple is your favorite?