Hey, everyone! I'm sorry that it has been awhile since my last update, but I hope this post makes up for it. A ton of pictures are involved but there's no such thing as too much cute. Right?


I've had a lot going on this year...family stuff, medical (though everyone's fine now), deadlines etc...and that's largely why I was missing from social media for awhile. But if there's one thing I've learned, it's that when life gets crazy and you don't have enough time in a day and you're physically and emotionally exhausted, that's when stopping...even for mere minutes...to do something you love...something that brings you joy and a sense of peace...is so important. If you don't recharge, you won't be able to help others (you all know the airplane oxygen mask rule about putting yours on first). For me, raising backyard chickens isn't just about having organic, pasture raised eggs, organic pest control, an endless supply of compost and the satisfaction of knowing I'm taking steps towards permaculture. Chickens make me happy. They have funny personalities and watching them free range is a beautiful sight. It's bucolic and serene and grounding.

So, naturally, I added 6 ducklings and 3 goslings to the family. What? You don't see the twisted logic in all that? I'm betting some of you backyard poultry keepers out there totally get it lol.

Oh, and I got Jersey Giant and Welsummer chicks too (3 of each) because I'm dying to try the breeds and eventually narrow down to a few favorites. As for the quantities, that in part had to do with minimum ordering laws around here. Bottom line is I had a lot of babies brooding in the basement in March/April!

I know you're wondering why I'd go and add more work to my schedule when I'm so busy as it is. For one thing, I've been wanting to try my hand at raising ducks and geese. I have so many pics to post that I'll have to leave all the reasons why they're great to raise for another time, but suffice it to say, I'M IN LOVE! I wish I'd gotten them years ago. Now, I still love my chickens, but I have to say ducks are flat out hilarious, geese are like puppies and both are incredibly smart and easy to train. I still struggle to get my chickens in their coop for the night, but all it took was 3 days to train my waterfowl and they caught on. Now, all I have to say is, "Go home. Go to bed." In fact, the ducks/geese are so smart that when they see me urging the chickens in their coop, they get in their house on their own and wait for me to lock the door (my birds free range but get locked up at night for safety).

Anyway, I won't keep you waiting on the pics. I've included some of the duck/goose house we built too. I'll go in chronological order, so first up are the chicks I got (all female). I did post some pics back in May on the Heartwarming blog, if you want to check them out too (not nearly as many as here though). 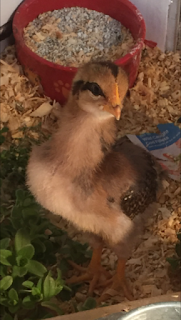 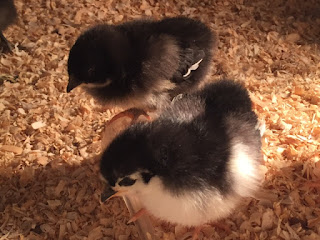 I had to order the ducks through my local farm store and (after much breed research and not being able to decide) I got 2 Pekins, 2 Rouens and 2 Khaki Campbells. These were unsexed so I had no idea what I'd end up. Turns out I have a boy and girl from each breed! I picked up the ducklings on April 12 (they were about 2 days old).


So here they are in a giant plastic tub brooder. I have a giant dog crate that my birds graduate to before the tub gets too snug. Let me tell you, ducklings and goslings grow much faster than chicks! Like, freakishly fast. 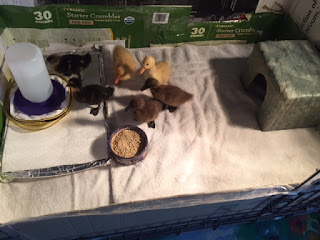 The pic above gives you an idea of how I set up the dog crate as a brooder. I had read up on all the different methods folks use to keep them dry (ducklings + water = mess) and went through a series of trial and errors. This first set up used old towels (reserved for pets). The water is on a foil covered pan with paper towels. I got tired of taking the real towels out two-three times a day to hose off and hang dry. Plus, it was kind of gross. The thing is, I'm very smell sensitive so I tend to keep my brooders/coops very clean. Also, to waterproof the crate and to keep the little ones from escaping or getting their heads caught, I cut up an old box in strips (vacuum box) and taped it around the crate then lined the bottom and a few inches up the walls with empty feed bags. 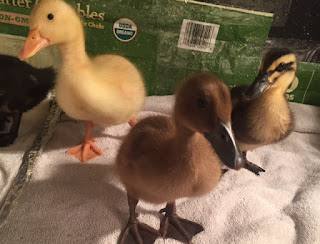 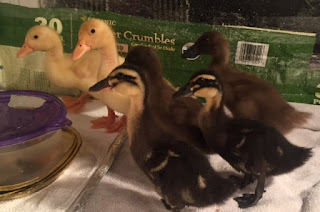 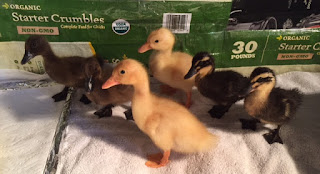 So remember how I got tired of using towels? I ended up using pee pads. I got the largest 'human' sized ones on sale (cheaper than puppy pads) and changed them out as often as needed. Now, I'm all about recycling and composting and minimizing what goes into landfills, but the towel washing situation was just more than I had time or energy for after awhile. Plus, we're on well water so all that washing was using water and electricity (pump). I hated using disposable pads, but I was desperate and OMG did it make life easier. More expensive, but a huge time and labor saver. And btw, I did try pine shavings (which I use in my chicken coop), but they kept eating them. I mean, really eating them, so I stopped.

Confession: I had convinced myself that I could wait until next year to try geese. I flip flopped a bit, but I missed the ordering date and figured that was that. But then my farm store went and posted on FB that they had some extra goslings. I needed to pick up bedding anyway for the chickens and figured I'd just take a look at the babies while I was there.

I came home with three.

I'm sorry but I couldn't resist. I figured the fact that I missed the order date, yet the store still ended up with a few and I just happened to see their post about it...was a sign. I was meant to take them home. Don't you love backyard poultry keeper logic? My husband hates it lol.

Anyway, these were Brown Chinese goslings and I'd read about how they're guard and weeder geese. There was one who I immediately suspected was a male. He was so much bigger than the rest (but still a baby based on no feathers)...bigger head and acted bolder and more curious. He would not take his eyes off me. He had me at hello. That imprinting thing is powerful both ways. So I got him along with two of the smallest, dainty looking goslings (presumably female). Now that they're older, I can tell you I got the sexes right. The goslings were less skittish than both the chicks and ducks from the start. In fact, they begged to be held and wanted nothing more than a lap cuddle. I'm telling you, feathered puppies! 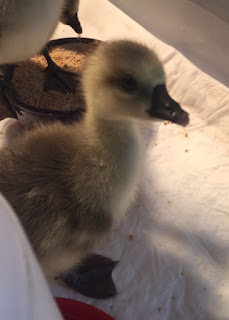 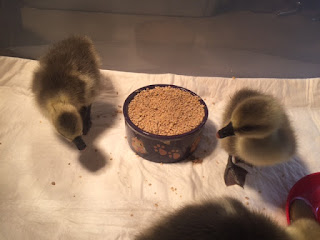 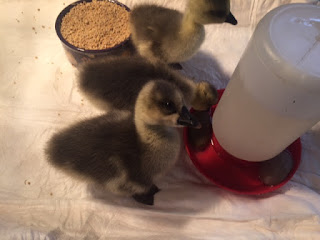 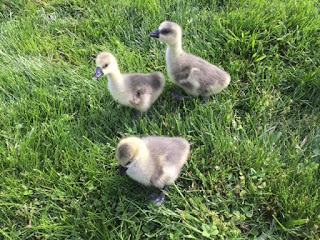 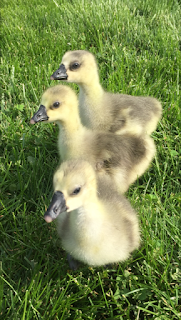 By the way, even before they went outside, I was clipping clover, grass and dandelions etc...and putting them in their brooders. I give all my babies (meaning chicks too) fresh greens from outside, along with dirt (as well as some chick grit), crumbled eggs and other nutritious foods. I'm not one to stick with just bagged feed. I also use things like oregano, other herbs and organic apple cider vinegar in the drinking water for gut health and to help prevent parasites (since I raise them organically and don't use chemical wormers). 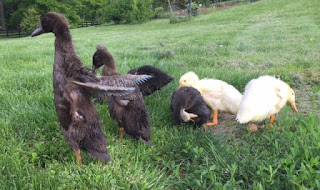 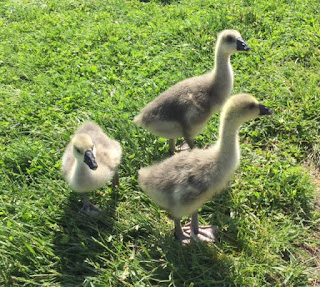 Sooooo....big piece of advice. These Brown Chinese are a swan goose. They get tall very fast. I had to move them to the big dog crate, only I still didn't have the duck/goose house done. But the ducks were too big for the crate. Which meant I had to get creative for a week with the ducks in the basement. The pee pads helped but I still ended up bleaching the area/floor when they moved out at the end of that week! These guys can make a swimming pool out of a single drop of water.

Advice? Have their outside home ready to go before you get them!

We did finally get the house done. It's attached to our chicken coop, which we also built from scratch. you can see some of that process in this old post HERE. The area is on an incline, hence the concrete blocks for leveling. It's also screwed into the back of the coop, which sits securely on 4x4's in the ground. 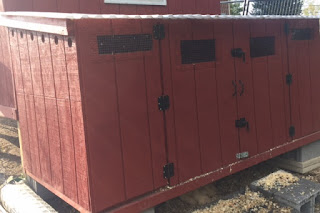 I had coated the floor of the chicken coop with Blackjack 57 roof sealer (another tip from www.backyardchickens.com). It made washing the coop out so much easier. So I coated the entire inside of the duck/goose house so that I can easily hose it out if needed. Keeping their water outside really makes a difference with keeping things clean. I also started with straw, but found out what's available has herbicide in it. I switched to the same pine shavings we use in the chicken coop and it has worked out well. I compost and I don't want my birds or my garden beds getting an herbicide dose.

Also, note that I had not drilled/cut the extra side and door ventilation in this pic but they were done before the kids moved in.

And a few more pics...
BTW, although my geese are named after Lord of the Rings characters, sometimes I refer to them as 'Guardians of the Galaxy'. After all, they're guard geese ;). 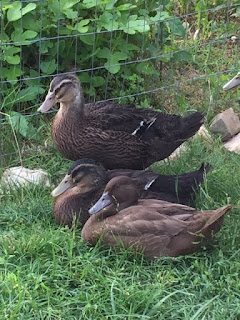 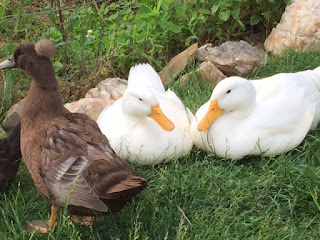 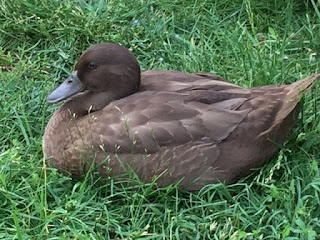 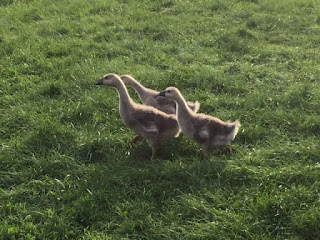 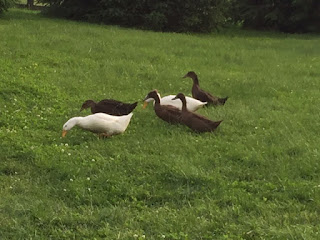 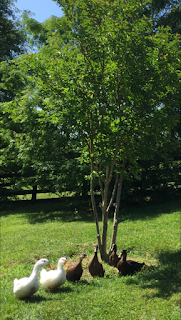 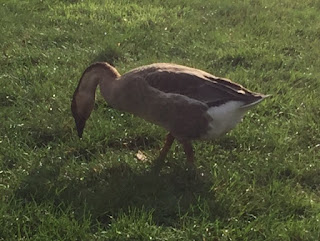 Sorry, I know that was a ton of pics, but I hope you enjoyed them. If anyone has questions about any of the above, feel free to ask in the comments. I'm not an expert, but I'm happy to share my experiences or what I've tried. I will add, for those thinking about waterfowl, you don't have to have a pond or lake. I have a creek, but they haven't been there yet. They do, however, need to be able to wash up, submerge their heads, preen and just have the kind of water fun they deserve to have. I bought a plastic kid pool on sale (less than ten dollars and now I saw some for less than five) and have another tub that I rinse/refill three times a day (they muck the water up). I move them around so that no particular area ever gets muddy. So far, so good.

That's all for now! I need to get back to working on book 5 in my 'From Kenya, with Love' series. Book 4 releases December 2017! It's titled 'Every Serengeti Sunrise' (my working title stuck) and is up for preorder. I haven't seen the blurb or cover yet, though. I will say that these next three books revolve around the kids from the first three...all grown up.

I'm also headed to RWA Nationals 2017, so I'll post pics soon. I'll be posting some on the Heartwarming Authors blog on Tues, Aug 1st with my friend, the lovely Catherine Lanigan too.