Happy 2018! I wish everyone a year of peace, love and good health.

I must admit my New Year was bittersweet. There were many wonderful things about it, but I also lost a beloved hen. She was from my original flock of day old chicks from spring of 2014. She went from totally fine to all puffed up on New Year's Eve. I tried all the first aid I could, from warmth to Nutri-drench etc...but by this morning she was gone.

Her name was Moon and she passed away on the Full Wolf Moon/Supermoon...right on that cusp between New Year's Eve and New Year's Day. The passing of one year gives rise to the beginning of another. The end of something...even life...means the beginning of something new...even life. I couldn't help but see the symbolism and significance of her passing. Or maybe it just made me feel better.

She was an easter egger and she laid the most beautiful light olive green eggs.

On a brighter note, the rest of the flock is doing well. We've had some cold weather and the chickens will eat, drink and hide back in the coop (or in the duck house), but the ducks and geese are loving the light snow we've had. 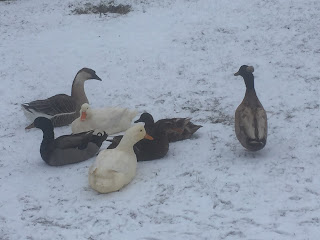 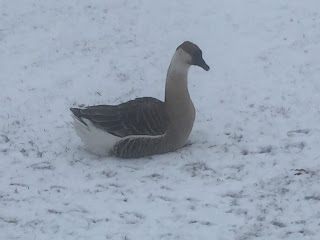 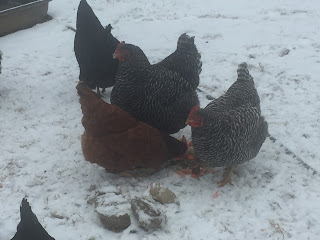 You might recall that I thought I had one gander and two geese when they were goslings...and then I got confused with one of them (Galadriel). Well, in the photo above, Gandalf is in front, Galadriel is in the middle (still thinking male now...unless she lays an egg come spring) and Tauriel is dunking her head in the bucket. [Edited on 1/2/17 to add that Galadriel is most definitely a guy. You'd think he'd keep 'it' tucked in with temps below zero, but nope, right after I carried water out, he tried to mount Tauriel in a small tub of water and I saw the evidence. Guess I'll have to rename...Gondor? Galdor? Gimli? Gamgee?] You'll notice I started to build a secure run for times when I can't free range (like when the fox comes around every spring), but it's nowhere near complete.

That's all for now. I'll post more pics of the run when it's finished this spring. For now, here are a couple to give you an idea of what we're doing. Our coops are on a slope, so we needed to build up one end to create a level base for the metal dog run (2 packs) we decided to use. Using dog runs and cinder blocks was the solution for not using pressure treated wood. You all know that I like to garden organically :).
I have rolls of rubber coated welded wire waiting to be attached to the lower part of the dog run (a couple of feet up) and skirted out/buried several feet out from the run to deter digging predators (including where the block wall is). This will be done around the outer base of the chicken coop too, of course. We also need to frame the inside of the run doors and attach predator proof locks/bolts...and cover the top with wire too. There's still a lot of work to be done. I free range but if I need them locked up, the run needs to be very secure. Of course, at night, I lock them in their coops for extra security.
You'll notice the dog run is set to the outer side of the cinder blocks. The reasons for this are 1) it'll allow for a straighter outer wall on which to attach welded wire from the run, over the blocks and skirted out (buried) and 2) having the hollow parts of the blocks to the inside will allow me to fill them with soil and plant herbs, lavender, flowers or grasses for the chickens to munch on or hide behind (plus it'll look pretty).

A level was used to make sure the wall didn't lean out (in fact it's graded a couple of degrees in) and rebar was hammered in for extra support on the taller, downhill side. In fact, in areas where the dog run isn't on blocks (ie hits dirt uphill), rebar was hammered into the ground and the run frame was inserted on it (threaded in the frame pole) for extra support. Gaps were also left for drainage...very important...especially with ducks and geese! Again, I'll try and take photos when the project is complete. For now, the ground is frozen and the temps are too cold.

So that's it for now.