Blizzard Jonas has come and gone and we're still stranded at home! I'm not really complaining because we didn't lose power and I stocked up on supplies before the storm hit. Plus, food-wise, we have an unlimited supply of fresh eggs lol. Not losing power has made a huge difference, because when you're on well water and septic, power loss means water loss and no running septic.

That said, our street hasn't been plowed yet. We started getting snow on Friday the 22nd. Schools were closed (and still are) and my digging began in earnest. I knew the heavy snow and blizzard were due to hit during the night and through Saturday, so I wanted to make sure the chickens had plenty of food and water (it kept freezing). Well, the snow came down so fast Friday afternoon that I by the time I dug a 2 ft wide path through 2 ft deep snow all the way to the coop which is about 60 ft away, I turned back and 4 more inches had already fallen. I made sure the flock was snug for the night (and most of the next morning). Saturday morning, it was really coming down and I didn't have the energy to dig, so I bundled up, balanced supplies (water, fresh greens, sunflower seeds, chicken feed etc...) in my arms and tried making it to the coop on foot. It wasn't easy. Talk about kick starting an exercise plan! The path I'd dug on Friday was completely filled so the snow was well over my knees. Picture all the leg lifts it took to make it to the coop and back! And these were blizzard conditions, so the wind didn't make it easy, but I'm stubborn when it comes to making sure everyone's taken care of (yes, I even filled the wild bird feeders at the creek before the storm hit).

For those of you who don't follow me on social media, here's a cute pic my teen son made of a few of my hens riding out the storm in a home theater. We came up with this idea after one of the Heartwarming editors joked that she hoped my flock was snug in my basement eating chips and watching movies ;). After all that digging, I kinda wish they had been!

When I told my teen that the digging left every muscle in my hands and arms aching (not to mention my back and the tendinitis in my ankle) and that typing was going to hurt, he told me I should rely on my writing team and came up with this pic:

I must say, cabin fever entertainment for teens is not what it was when I was a kid! :)


Anyway, on Sunday, the sun came out and I had to re-dig all the way to the coop. I also needed to dig an area for the dogs to do their business. They had managed to do so in a small area during the storm (they were confused and reluctant), but my larger dog (think super tall poodle size in shoulder height) sank in the snow when she tried running off. I thought I was going to have to pull her out, but after some struggling, she made it back to the door safely.

My reward for all that digging are the gorgeous views left by the storm.

Our land is set in a bit of a valley with a hill to our west side and creek to the east. This topography tends to invite strong winds to swoop down on us and any snow being blown, settles around our place.


So after digging to the coop, I dug out an equally deep front walk (about 35ft) because our front door faces north and would take forever to melt. My husband and boys were working on our driveway, which took a couple of days (we're in the country so our driveway is just under 200 ft and the snow had drifted, making it at least 3-4 ft deep there).

And as of this evening (it's after 5:30 pm Tuesday as I'm typing this), our street hasn't been plowed. The department of transportation did finally make it out to our neighborhood's streets today, but for some reason, they drove right past ours. We're the only street here that didn't get plowed, and yes, my neighbors and I called in to report the situation, but all they could do was to put in another 'work order' and hope to make it back by morning. Our neighbor and my husband are out there trying to clear as much as they can, but it's simply too much snow. When it's that deep, the smaller mowing tractor plow attachments and snow blowers don't work well.

In any case, school is cancelled tomorrow too and we'll see what they say about the rest of the week. I've heard that someone in our area had to be airlifted (because of unplowed roads) to a hospital due to heart problems. I saw on the news that many died after suffering heart attacks while shoveling...and many more died from accidents and hypothermia. My heart goes out to their friends and families. Although it left us with beautiful scenery, Blizzard Jonas was powerful and dangerous...and deadly. I'm not about to complain about shoveling or a plow passing us by. At least my family is safe and sound.

If you were in the path of the storm, I hope you and yours are safe and sound too!
Posted by Rula Sinara at 5:52 PM 2 comments:

Hi everyone and Happy New Year!

I had a rather eventful end to 2015 including, but not limited to, the hard drive on our main computer dying (luckily it was still under warranty, but diagnosis and repairs stole a chunk of time), my line edits on Through the Storm being due (did I mention computer issues?) and...the biggie...the septic system alarm going off on New Year's Eve. We'd been having heavy rains and I thought it might be related, but it turns out a pipe in one of the septic tanks had broken. Luckily, the septic company called me back right away, instructed me not to use water (as in dishes, showers etc...) and the guy came out on New Year's Day for repairs (not warrantied). I'm so thankful that nothing backed in the house and everything was caught in time, so no major complaints here :).

And...I got my line edits done! So the third book in my From Kenya, with Love series, Through the Storm, is good to go! I haven't seen the cover yet, but it's already up on Amazon for pre-order and they have the blurb for the story up too. And I have awesome news!!! Starting this month, print copies/paperbacks of all Harlequin Heartwarming books will be available on Amazon and Barnes & Noble online!!!

Tessa Henning is no damsel. But she's definitely in distress. If her husband really is involved in the ivory trade, he'll come after her when he finds out what she's uncovered. Unfortunately, the only person who can help is Mac Walker. Stubborn, fiercely independent, danger-loving bush pilot Mac Walker—with whom she shares custody of their orphaned nephew. Though Mac's no knight in shining armor, he can keep her and their nephew safe in the Serengeti while they wait out this storm. But he can't protect Tessa from the strange weather brewing inside her, stirring up feelings for Mac she wishes she could ignore... 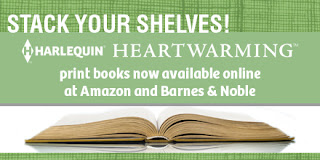 But that's not all...right now, print copies of current releases are also available in select Walmart stores nationwide (find a store near you by using the link on this page at Harlequin) and the Heartwarming authors are hosting a tour and Rafflecopter giveaway to celebrate! Read on for entry details...

On tour with Prism Book Tours.

We're thrilled to be spreading the word about Harlequin Heartwarming books now being available in local US Walmarts. Join in the fun by taking some selfies with a Heartwarming book or two to win a Walmart gift card. Heartwarming titles are also 35% off at Walmart through the end of January!

Ten Heartwarming authors are sharing their own selfies and messages at each stop of the tour! Stop by each day to check them out...

15 - $10 Walmart Gift Cards
- Rules: To enter, take a selfie at a local Walmart with a Heartwarming book and post publicly on social media (can be your hands, your face, etc. with a Heartwarming book). Can enter once each day with a different picture each time. Those who post the same picture multiple times will be disqualified. Those who only post privately (so that it can't be viewed publicly) will also be disqualified.
- US Only
- Ends January 20th